After church Sunday, I had a very busy day.  My wife and I took a walk; I drove my 2nd son to his “ride” that would be driving him the 3+ hours back to college; I picked up my daughters friend to spend the night; I tried to stop at a B&N to get my daughter and her friend both a book they needed for school, but had to reserve two copies at another store; I drove  home to pick up my other daughter and son before heading to the larger and better stocked B&N, AND after picking up a couple of ingredients from Walmart (not the ideal place-we will plan better next time) and helping cook outside with the wok, we ate Korean BBQ.  It was ALL worth it!!

After skipping the arrival of our exchange students and the alternating meal cooking by our exchange students of which a Korean meal was now scheduled, our adventure began Friday night at the Super H-Mart.  As I review our purchases of the evening, the most critical purchase was the beef.  (Some Krogers stock the BBQ sauce.)  Although the kimchi was a close second, the thinly cut beef is not very easy to find in most butcher departments.  (The Sprouts butcher told me yesterday they don’t have the slicer to do it.  So, future Korean BBQ feast may mean a bit of a drive before hand.)  All agreed the beef was excellent.  The kimchi experiment needed a little work, but not all cultural experiences turn out perfectly.

While the beef was being marinated (the key was definitely in the sauce.  The other vegetables were good when cooked in the wok, but it was the meat flavor that sealed it), our Chinese student made “egg pizza”.  It involved egg, flour, and the extra chopped green onions.  The taste was good, but the second one was MUCH more presentable.

The kimchi pizza was a different animal!  After the kimchi was chopped, flour, an egg, and a “special” mix from our market purchase were added.  Once the mixture reached the right consistency, they were dropped in a pan. (She called them pizza, but I think “pancake” is a better illustration)  In her nervousness, I think the pancakes were rushed through the cooking process.  The flavor was good, but an after dinner re-frying, made sure they were all cooked through and fully edible when it came time for warmups.

I don’t know if our exchange students enjoy our game/challenge of them cooking us meals.  Beyond the pictures we are able to take and send/post for their parents to see, it provides a very rich cultural experience for our whole family.  (We had friends over for the Korean meal, so it even expands out beyond our walls!)  I believe both or our students helped their parents when at home more than did the actual cooking.  Whatever they present to us is heavily complimented while possibly dripping a little sarcasm.  Even when they are “forced” to eat our takes on American food, it is such a blessing interacting with them.   They like more veggies and shy away from too much bread, but they like flavor.  We welcome flavor of all types of all countries at our table.  I am not sure what dining awaits me the rest of the year.  It is likely to be full of new flavors and, if I am lucky, fewer calories.  Serendipity is grand! 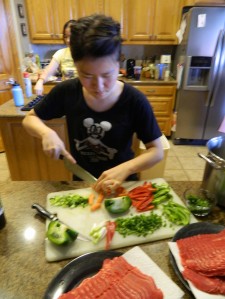 Prepping all of the vegetables 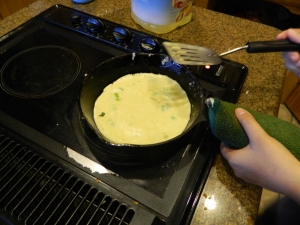 Something made by Dawn–I think she called it egg pancakes…?? 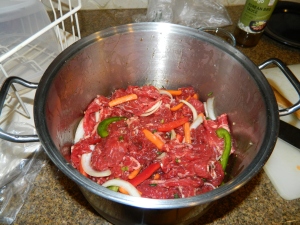