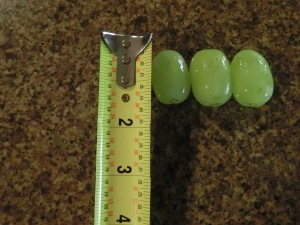 A visit to Sam’s brought a new 3 pound container of green grapes into the house.  While not all past vine dwellers were as welcome, I am happy to say my daughter picked very well today.  The texture gave slight resistance and the skin was just the right firm.  The only thing slightly wrong with them was their size!  Most of the grapes were as large as the top half of my thumb!  As we ate some of them with lunch, the smaller mouthed individuals made each grape last for 2 or 3 bites before the grape was fully consumed.

After lunch, my son decided to participate in a game we occasionally do to assist in father-son bonding.  Usually the game consists of tossing M&Ms into the air on an arc toward his head.  If I do my job correctly, a couple small neck adjustments will allow the M&M to easily be caught in his mouth.  Because we apparently needed to do some “power bonding”, we attempted the M&M trick with these over-sized, under-seeded fruit ovals.  My sons skills were quickly evident.  He adjusted how far he opened his mouth (he had to open it ALL of the way), but otherwise, it was the same eye-mouth coordination as before.  The first two grapes followed this pattern.  He zeroed in on the grape, caught it in his mouth, and he was careful not to choke on the green projectile.

Although I did not consciously want to “mix it up”, my sub-conscious was likely a little bored.  The third grape did embark on an arc just like the other grapes, but as it knuckle balled (my fingers planned this without my realizing it) toward my sons mouth, it ended up being to great of a challenge-the “center” of the grape was to hard to calculate .  It smacked him in his upper lip as his mouth was anticipating the impact.  We did allow a “knuckle-less grape” do over which was much more successful.

While fruit does not always bring people together, I am glad my son and I can “rework” old games with grapes as a centerpiece.  I have not always been a perfect father, but on the days when I “know” I have done a pretty good job, it usually involves a bit of laughter and a dash of ridiculous.