Who Moved My Chair? 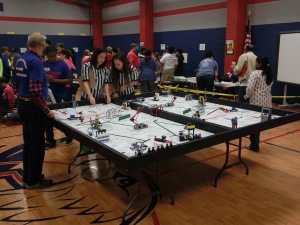 Saturday was the culmination of many hours of labor for my 8th grade robotics team.  Although I was their “coach”, they didn’t really need me very much.  They are all very good students, and my primary role was keeping them on “task” over the past few months.   The FLL program they participated in is very well organized.  Feel free to follow the link for ALL the info you may want to find out about the program.

My entire Saturday was spent mostly keeping the team in front of the correct door or the correct table at the designated time.  Coaches were not allowed to be with the kids while they were being judged or while they were running their robots on the course.  Translated:  There was a bit of down time.  Also, since the school that was hosting the Robotics judging was hosting more people than it was used to, coaches were instructed to bring chairs if they wanted to be guaranteed a seat.  With my card table chair in hand as I entered the gym, I had my permanent spot reserved for my posterior whenever I wanted to park.  (In my mind, I didn’t think outdoor collapsible chairs would work.  They are outdoor chairs, aren’t they?  Sure they are cool with their armrests, but I just didn’t think this was the type of chair to bring to an event like this.  Would it hurt the wood gym floor?  I guess I am sometimes overly-conscientious. )

Each of the 26 teams at this robot judging, received an 8′ x 8′ area for their team to setup.  My team’s area was right by the main entrance.  The robot course tables (see above) were just in front of our area inside the main entrance.  Whenever a judging took place, all of the parents who were not permitted to enter any of the judging areas, flocked to watch their child’s team robot do all of the task it could in the 2:30 minutes it was given.  Additionally, each team got 3 chances to run this course.  Hopefully, my description implies it got a little crowded in front of our “space”.  As it worked out, we willing relinquished a portion of our space before eminent domain was necessary.  We huddled in the back half of our space knowing it was a contribution we were unlikely to be thanked for offering.  Other than one of the kids getting sick in the bathroom and having to go home early, the morning was pretty smooth.

Lunch time for 40 (30 kids and 10 adults) equals about 16 pizzas, or at least it did today.  Although we (the emphasis on the kids) tried to eat them all, about 1/4 of them made it home with us.  After lunch, my team had about an hour before their final robot run.  As I walked into the gym, a quick rightward glance showed my chair was gone.  I gave it a little time thinking someone had borrowed it and would return it after lunch.  As my team worked with their robot to figure out what programming changes they needed to make to allow their robots to work on the slightly larger (only 1/4 inch or so, but it makes a difference) course, I walked the gym looking for where my chair may have taken sanctuary.  I received a few looks as my glances moved from chair to chair.  As it turned out, the only card table style chair was right across from our space.  I was sure my chair was more gray rather than the olive gray offered by this chair candidate.  I roamed the halls and the cafeteria trying to determine if someone had hijacked my chair to any of these other locations.  I thought I might getting a text with a ransom request, but it never came.  I guilted someone into giving up their chair to the “poor guy who lost his”, and I mentioned my predicament to the staff.  I didn’t want momma to think I lost it without at least trying.

While I suffered through this possible loss of the chair, my robot team had a very good run on their third try.  Apparently, my “hands off” coaching style was continuing to prove itself yet again.  As the meet was winding toward awards, I approached the group where “my” chair was setting.  They claimed it showed up right before lunch.  Since there was difference in time of disappearance, I was pretty sure I would be walking out with this chair even if my chair didn’t turn up.

As it turned out, my chair obsession in no way hindered my daughter’s team from success.  They got second (or third) place at this meet.  And, since the top 6 were going to the regional on February 14th, it looks like my Valentine’s Day would not be spent smelling roses or eating chocolate.  Fortunately, the chair I walked out with did have at least one twin at our home.  I credit my chair obsession as the reason for the team’s success.  Kids like a coach better when he is not in helicopter-mode.