Something Happened While I Was Sleeping 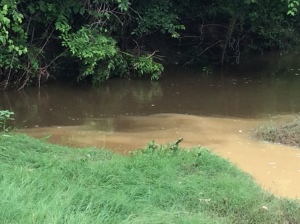 As I woke up from a less than fulfilling sleep, I sensed something was different. A glanced at my wife’s empty side of the bed and confirmed part of my suspicions.  And, as I wondered out into the kitchen, the kitchen was alight with the Memorial Day preparations that the previous days graduation and graduation parties left no time for.  The downstairs a/c was off and the doors were open–yesterday’s humidity was apparently less lethal than it was last evening. The swimming pool, somehow, had swallowed an extra inch or so of water.  And, my daughters comments of, “The water was over the bridge.”, made me wonder what had occurred.

After breakfast and my feeble attempts to begin some internet research, I embarked on my walk. (Yesterday, I took a one-day sabbatical from walking.  While I have convinced myself a daily walk is important, taking a day off seemed to put an extra spring in my step as I emerged from my “walk-fast”–not be be confused with “walking fast”.)  The past couple of years in Texas have allowed me to anticipate where my path is susceptible to flooding.  And, it has shown me what it looks like when the muddy waters of the creek/crick/man-made-run blend with the lively little brook from across the street. (see above) It has given me fair warning of the places I will need to tiptoe thru (not tulips, but tadpoles seem to frequent this pond.  So, literally, I am “tiptoeing thru the tadpoles” as they race under my outstretched feet.) to avoid the pond that has been in almost perpetual “flood” stage for over a year.

All of this rain could be global warming or just a shifting of weather patterns.  If the earth is a billion or whatever years old as some claim, certainly she is allowed to be a little fickle and “shake it up” a little bit. While  I miss the blue skies and since there are no universities granting any “God” degrees (This would be quite a few degrees over a doctorate–so many degrees, in fact, no human could earn it in multiple lifetimes.  Thus, the reason the degree does not exist…just my guess.), we just need to be grateful to the God above who gives us life daily.  If you are not getting the life you want, ask Him if He has a better plan than the one you are aiming at.  Ask sincerely, and patiently look for the opportunities.

So, what happened while I was sleeping?  I am not certain what happened on this day, but I know one thing I need to do daily.  (Some days are better than others.)  I need to find the optimist who often dwells deep within.  The usual “me” dislikes rain and disruption to schedule.  The optimist sincerely says, “It’s all good.” and genuinely smiles despite the environment.  On this day, the optimist quickly leapt up to claim it as one of his.  On other days, the optimist and pessimist have to struggle from moment to moment.  Fortunately, I am grateful God has a plan and still loves me even when I struggle and I don’t feel all that lovable.